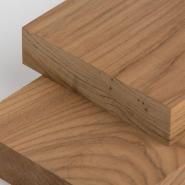 Indigenous throughout the greater part of Burma and the Indian Peninsular, in Thailand, Indonesia, etc. It has also been introduced into Malaysia, Borneo, the Philippines, and Tropical Africa and Central American, Etc, with varying success.

Very variable in size according to local climatic and soil conditions. In favorable areas it is found with a long, straight, clean stem, but which, with advanced age becomes more fluted and buttressed towards the base, while in less favorable areas particularly those with hot, dry, climates, the bole is more fluted and the tree branches more. In some areas the bole is clear for 4.5m to 7.5m with a diameter of no more than 0.3m but in the more favorable locations such as the valleys of the larger rivers in Upper Burma, and in parts of the west coast of India clean boles may be 9m to 10m length, with a diameter of 1.5m

The sapwood is usually narrow, pale yellowish-brown in colour, and the heartwood is dark golden-yellow darkening on exposure to brown or dark brown, sometimes figured with dark markings. The wood is dull with a rough oily feel and characteristically scented when fresh, the odor reminiscent of old leather. The grain varies from straight, typical of the best Burma Teak, to wavy grained, which is more typical of Indian Teak. The former material is generally more uniform in colour with few markings, while the latter especially from Malabar, is often more generously marked. The texture is rather coarse and uneven, and the wood weighs about 660 kg/m3 when dried.

Teak dries slowly but well, the main problem being the often erratic distribution of moisture throughout individual pieces and between pieces.

The timber is strong moderately elastic, and hard, but is rather brittle along the grain. By comparison with English Oak, air dry teak is some 10 to 20 per cent inferior in resistance to impact but is stiffer and stronger in bending strength by a similar amount. Early tests carried out at Dehra Dun on naturally- grown and plantation-grown teak from Burma and Malabar indicated there were no essential differences in the general strength properties of either types.

Although the working qualities are somewhat variable, the wood in general works with moderate ease. The dulling effect on cutters varies from moderate to severe, but the wood is capable of a good finish if cutting edges are kept sharpened. It turns well, and can be glued stained and polished. It holds screws and nails reasonably well, but the wood is inclined to be brittle. It produces veneer with ease.

Teak enjoys a world wide reputation owing to its durability, strength, ease of working, moderate weight, agreeable appearance and small movement in fluctuating atmospheres. It is used for a vast number of purposes, for furniture, boat and ship building, for decking, deck houses, rails, bulwarks, hatches, hulls, planking, oars, and masts. It is used for high class joinery, doors staircases, paneling, veneer, plywood, dock and harbor work, pilling bridges, sea defenses, flooring, for light to moderate traffic, and for uses where chemical is a requirement, e.g. laboratory benches and chemical vats. For the most decorative forms of furniture the best make teak is found in the dire regions of the Central Provinces, Deccan and the Malabar Coast of India.