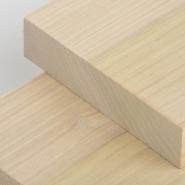 A number of poplars are found growing in the British Isles and Europe. Six main types are found in The UK, the grey poplar the black poplar and the aspen are usually regarded as indigenous species, while the white poplar, Lombardy poplar and the hybrid black Italian poplar have been introduced.

With the exception of the white poplar and aspen, the trees reach a height of 30m; the two former species seldom exceeding 18m. The diameter of all types is around 1m.

Poplar can be grouped with willow, lime and horse chestnut, since they are all soft, fine textured woods, generally without luster and without any very characteristic colour. Poplar wood is whitish or grayish in colour generally but may be light brown, with no clear distinction between sapwood and heartwood. It is usually straight grained without odor, uniform in appearance, rather wooly to the touch, and light in weight, the various species weighing about 450 kg/m3 when dried, although they grey poplar is usually a little heavier at 480kg/m3.Commercially the general quality of poplar reaching the market varies considerably according to the area of production, and the degree by which the many species and their hybrid formats are grey poplars is generally of relatively low quality, with a very wide, whitish sapwood and a reddish-brown heart wood. Much of the poplar from France and Belgium is generally composed of timber of the black poplar group.

Dries rapidly and fairly well, with a tendency to retain local pockets of moisture, and for knots to split.

For their weight poplar timbers are relatively strong and tough, and in the dried state, and depending on type, are only about 15 to 30 per cent inferior to European oak in all strength properties except hardness and shear, where they are about 50 per cent inferior.

Black Italian Poplar is reputed to have the best working properties, and white and grey poplars to the worst, tending to bind on the saw, and to produce a wooly surface. All types with the exception of the aspen are slightly tough in working. Aspen comparing more closely to lime in this respect. A good finish is obtainable with all species however, if thin, sharp edged tools are employed. They can be glued satisfactorily, and take paint, polish and varnish quite well, but while they can be stained the wood accepts the stain with patchy results.

Its toughness and non- splintering, wooly nature makes poplar ideally suited to employment for the bottoms of lorries, railways wagons and carts subjected to rough usage. It produces good constructional veneer for plywood, chip-baskets, and splints for matches. It is used in furniture for framing and drawers, for interior joinery, beer-cask hives, toys, industrial and domestic flooring, boxes and crates, and as an alternative to alder for hat blocks.