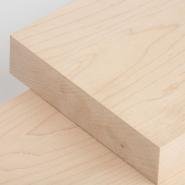 Field Maple, Acer campestral L. is found in Europe, including England and Wales, from Southern Sweden to northern Greece and extending into Russia and Asia Minor.

The maples constitute a genus of over a hundred species spread over Europe, Asia, North Africa and North America, and include a number of important timber producing trees. The timber has similar properties to sycamore, but while on good sites it forms a small tree 6m to 12m high, it is often little more than a bush. Norway maple Acer Platanoides L. is also known as Bosnian maple of European maple. It occurs in the continent from Scandinavian southwards into Asian Minor and the Caucasus, and is found throughout Greta Britain where it was introduced from the continent in 1683.When dried the wood of field maple weighs about 690kg/m3 and that of Norway maple 660kg/m3, both being a little heavier than sycamore at 630kg/m3.

It is used for turnery brush backs and domestic wood ware.