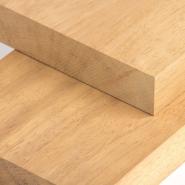 C. excelsa has a wide distribution in tropical Africa, from Sierra Leone in the west, to Tanzania in the East.C.Regia is confined to West Africa, where it occurs from Senegal to Ghana. There does not appear to be in significant difference between the timbers of the two species.

C.excelsa attains very large sizes, reaching 45m or more in height and up to 2.7m in diameter. The stem is usually cylindrical and mostly without buttresses. It occurs in the rain, and mixed-deciduous forests.

When freshly cut, cut or when unexposed to light, the heartwood is a distinct yellow colour, but on exposure to light is quickly becomes golden brown. The sapwood is narrow, being about 50mm to 75mm wide, and clearly defined. The grain is usually interlocked and the texture is rather coarse but even, and the wood weighs on average 660kg/m3 when dried. Large hard deposits of calcium carbonate called 'stone' deposits are sometimes present in cavities, probably as a result of injury to the tree. They are often enclosed by the wood and not visible until the time of sawing, though the wood around them may be darker in colour, thus giving an indication of their presence.

The timber dries well and fairly rapidly, with only a slight tendency to distortion and splitting.

Iroko has excellent strength properties, comparing well with teak, though weaker in bending and in compression along the grain.

Iroko works fairly well with most tools though with some dulling effect on their cutting edges, especially when calcareous deposits are prevalent. On quarter-sawn stock there is a tendency for grain to pick up due to interlocked grain, and a reduction of cutting angle to 15 degrees is usually necessary to obtain a smooth surface. An excellent finish can be obtained if the grain is filled. It takes nails and screws well and can be glued satisfactory.

The timber is of great importance in both East and West Africa. It is valuable for ship and boat-building, light flooring, interior and exterior joinery, windows frames, sills, stairs treads, fire-proof doors, laboratory benches, furniture, carvings, marine uses such as piling, dock and harbor work, and produces a satisfactory sliced veneer.