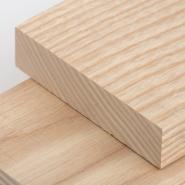 Occurs in Canada from Nova Scotia to south western Ontario, and in America from New England, the Middle Atlantic and Central States.

The tree reaches a height of 15m to 18m or a little more, and a diameter of about 0.75m. The sapwood is almost white in colour, and the heartwood varies from light brown to reddish-brown, rather similar to European ash, but a little lighter in weight, about 670 kg/m3 when dried.

The tree species given are the principal ones making up commercial American Ash, but there are several minor species which provides ash timber. Because of the differences in density rate of growth, and general strength properties, the various species are usually segregated into tough and soft grades, the former being suitable for work which demands toughness and elasticity, while the latter type, with its milder nature is more suitable for interior joinery cabinets and furniture. The tough grades are used for skis, striking tool handles, boat frames, vehicle bodies, church pews and shop fitting.